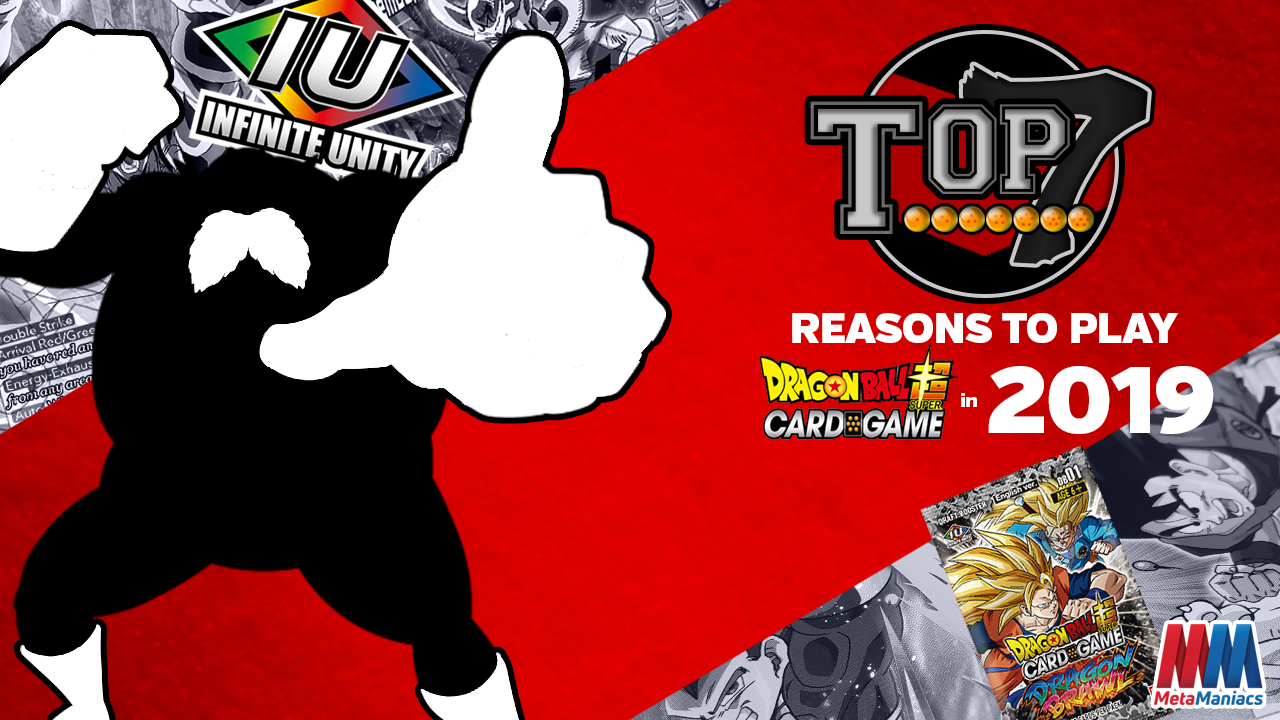 Yeah, you – the one leaning into your phone, checking out a link shared with you on social media.

Do you play the Dragon Ball Super Card Game?

Maybe you started when it came out and weren’t sure about the game’s trajectory, or maybe you are just hearing about it right now. Perhaps you took a break for a while after hitting it hard, or maybe you missed out before but are concerned about the hassle of jumping into an already-established TCG.

As much fun as it is to ride the wave of new TCG after new TCG, there’s a lot to be said about really digging into one that’s trending in a great direction, and that’s exactly where we think the Dragon Ball Super Card Game is at right now. Welcome to our inaugural Top 7 list, where we are going to dive into the Top 7 reasons why you should be playing the Dragon Ball Super Card Game in 2019! Without any further ado, let’s hop right in.

For those looking for interesting tournament play, the nearly unanimous consensus across the DBSCG community is that Series 7 has brought a new era of excitement to the metagame. From unconventional leaders like Towa (Front/Back), to new and exciting Starter Deck leads like Cabba (Front/Back), all the way back to classic leaders like Pan (Front/Back) – and everything in between – there’s an absolute glut of playable decks in the format right now. This is all thanks to the curation of the banned/restricted list and new Counter options that have slowed the game down enough to give many decks the breathing room they needed to get going.

One need only dig through a list of recent decks (we recommend Shenron’s Lair) to find a cornucopia of new ideas to build off of – Bandai has done an excellent job of managing the power level of the metagame and has been working to introduce new cards in releases like the Special Anniversary Box and the upcoming Draft Box to help reinvigorate older decks and archtypes and keep them relevant now and going forward. It’s a refreshing direction and bodes well not only for the current metagame, but the health of the game in the future.

While the constructed game is great on its own, it’s always nice to be able to mix up your gameplay a little bit. Nothing helps you develop your fundamental TCG skills like some Limited format exercise, and Bandai has gone through 3 iterations of their Draft Box format so far to…unremarkable results.

Enter Draft Box 4 – Dragon Brawl, where Bandai reveals their absolute determination to make Draft a thing. In this exciting release coming in just about a month from the time of writing, a unique set has been developed as a mix of staple reprints and entirely new cards that is going to be much more suitable for Drafting, which promises a more exciting and interesting Limited format than the DBSCG has ever had before. Not to mention these cards are legal for constructed play, making it a great place for a player jumping in (or back in) to pick up some useful cards, and for all players to start brewing up some interesting decks using the new cards from the box. If you are looking to shake up your gameplay, check out your local store’s calendar and don’t miss out on trying this new draft format!

If you’ve been a player of various TCGs for a while, you may be familiar with this story: A TCG releases, it’s fun and interesting, but it has a few problems. Set after set release, and the problems are never addressed, despite the community’s united distaste for them. It seems like the company doesn’t even care what the community thinks and leaves an awful taste in your mouth. Know what I’m talking about?

Thankfully, as of late, Bandai has greatly stepped up their game and are soliciting feedback from both players, retailers, and their TOs for nearly every release and event series they run. They are constantly looking to make sure they are bringing the players and fans exactly what they want to see, and it can be seen in decisions like bringing back the Signed SPRs (SPR-S) in Series 7 after not featuring them since the Tournament of Power set. While not every decision will please everyone, and some take time to develop into a functional change, it’s clear that Bandai is listening, and if you want the game to improve, the tools are in your hands to have your voice heard!

As a part of improving the general experience of the game, 2019 has seen an array of improvements to the prizing at events at all levels, including local events and bigger conventions. Pre-release event kits have been improved with uniquely stamped foils that become hotly chased-after cards for those blinging out decks, and event pack prizing introduces exciting new foil versions of staple cards that will let you show off your event prowess. Power Boosters have continued to release and are now completely revitalizing archetypes or providing timely answers to problematic cards (like Mutaito, Skill of a Sage).

At the Regional and Convention level, players are able to compete for sought after playmats with unique printing and stamped cards that show their prestige in playing in those events. While prizing for the absolute best-of-the-best players may never match the hard cash offered by some TCGs, many players will find a lot of value to chase after in all these prize improvements and Bandai continues to work towards making events fun and lucrative for players to attend.

While this one is really for any TCG fans, it’s especially for those who checked out the game in Series 1 and decided it wasn’t for them: after the years producing cards for the game, as many games tend to do, the game has at last matured into a form that is honestly hard to recognize from its Series 1 self – and I mean that in the best way possible.

The addition of Black (colorless) cards, Multicolor cards, Wish awakening leaders, Overrealm cards, and a vast array of keywords and theme-focused mechanics has grown the game to the point where every new card and mechanism seems to be taking the game in an exciting direction. For those players who are long time TCG players, there’s a lot more to crunch into than the more basic gameplay of the first set. And the addition of all these cards often come with unique themes – if you never thought you’d play Kid Goku (Front/Back) vs Zamasu & Goku Black (Front/Back), that’s now a match you might see in a top level tournament! If you haven’t played in a while, I recommend giving the game a shot with some of the newer stuff, because you just might fall in love!

Speaking of exciting new mechanics, the recent block – Infinite Unity – just kicked off and is offering us three sets worth of multicolor cards, with each set focusing on two different two-color combinations (Series 7: Green/Red and Blue/Yellow; Series 8: Green/Blue and Yellow/Red, and Series 9, presumably: Green/Yellow and Blue/Red). Multicolor cards share the Energy Exhaust mechanic (Energy comes into play rested), and some cards feature the Arrival mechanic which allows players to play those cards cheaply during Battle with matching colors in the Combo Area. In addition, each color combination seems to feature its own unique keyword, so far with Green/Red using the aggressive Alliance keyword and Blue/Yellow’s defensive Aegis keyword.

Much like the exciting release of Ravnica: City of Guilds in Magic: the Gathering, the Infinite Unity block will change deck building going forward, providing empowerment to every two color combination and “Infinitely” expanding the pool of ideas for savvy deck builders. Each combination also features multiple unique themes, allowing players freedom to build unique decks based on colors, theme, both, neither, and all the options that lie between! The Infinite Unity block is a great time to jump into the game and experience this thrilling shift in deck building options that is sure to shape the face of the game moving forward.

As a game’s card pool grows, the tradeoff of having a much deeper and more exciting game is that it’s harder and harder to get into it. Well, here’s our number one reason to play the DBSCG in 2019: Despite having a deeper and more enticing game, it’s actually never been easier to jump in and start playing at a high level!

From two types of starter decks (Starter and Expert decks), both of which include staple cards for deck building and powerful leaders, to special releases that introduce new ways of getting expensive cards into the market (Special Anniversary Box, Draft Box 04), to sets that include up to 3 versions of the same Super Rare card, allowing budget-friendly players to pick them up for cheaper while bling-out players find the cooler foils, everything is coming up in favor of the player in Dragon Ball Super today. While some key cards for decks are locked behind promo packs, it’s easy for local shops to sign up for these events (though there is a bit of a wait if your shop is new!), and given a bit of time, enough of these cards are printed where they become reasonably obtainable on the secondary market anyway. And for those that aren’t – well, a reprint is sure to come soon enough (like the upcoming Broly: Br and Gogeta: Br Magnificent Collections!).

DBSCG is the kind of game where you can get going competitively on a relatively tight budget, and you can keep going because you’ll be sucked into the excitement of trying new decks and waiting for the next release. Honestly, we think it’s one of the TCGs to play in 2019, and if you don’t have the time or money to invest right now, it’s a great one to keep an eye on because we think it will only continue to improve into the future!

That’s it for our Top 7 today, folks – is there anything we missed or that you agree or disagree with? Let us know in the comments here or on Facebook and we will see you in the next one!

Not What You Were Looking For?